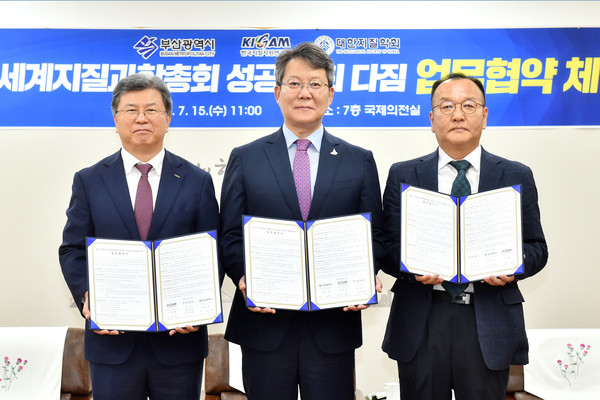 In the agreement, each participating organization’s roles and how to cooperate for the successful hosting of the 37th IGC in 2024. It includes preparation activities such as public relations and promotions at home and abroad of all related entities such as industries, academia, research, and government can join altogether like the one Team Korea.

International Geological Congress (IGC) was organized in 1878, which is a nonprofit scientific and educational organization whose meetings are held in collaboration with, and under the sponsorship of the International Union of Geological Sciences (IUGS). IUGS holds its General Assemblies in conjunction with Sessions of the IGC. The countries bid against one another to host this largest geoscience international conference that lasts for 7 days in every 4 years; and thereof, Geoscience community considers IGC as the Geoscience Olympic. During this period, approximately 6000 participants come around the world. In this context, the IGC truly is a global Geoscience Festival/Olympic.

The 37th IGC will be held in the Busan BEXCO convention center on August 25, 2024. This Geo-festival will last for the next 7 days. The experts and related organizations around the world will participate in the GeoExpo, Geo-Film Festival, Geo-Field Excursion programs, and world-renowned scholars’ lectures and expert discussions about ongoing Geo-issues and cutting-edge technologies.

With this agreement, KIGAM and the Geological Society of Korea will cooperate for the UNESCO World Geopark Certification Project of the Busan National Geopark. With the support from the two big pillars in Korea’s geoscience community, it shall be the green-light signal for the Busan city to promote the National Geopark business. The UNESCO’s candidate selection process will initiate starting with on-site inspection in 2022, and the final certification will be approved by the UNESCO in 2023, which is one year before the IGC 2024. It is going to be timely right once the candidate region is selected.